Leicester are through to their first FA Cup final since 1969 after Kelechi Iheanacho edged Brendan Rodgers’ side past Southampton on a night when thousands of spectators returned to Wembley.

A number of Leicester and Southampton fans were among those at Sunday’s semi-final, with in-form Iheanacho settling the tie by slotting home early in the second half to seal a 1-0 victory under the arch.

There is expected to be 21,000 in attendance – including far more supporters – when the Foxes return to Wembley on May 15 to take on Chelsea looking to win their first-ever FA Cup.

Hopefully the showpiece will be more exciting than the drab semi-final.

At least Sunday’s tie was memorable for the return of spectators, with Leicester edging a cagey first half and then landing a 55th-minute gut punch just as Saints looked to be waking up.

Jamie Vardy, who wasted the best chance of the opening period, got free down the left and crossed for in-form Iheanacho, whose poor first effort kindly deflected back to him and he slotted home.

Saints launched a meek response for a leveller as they quickly ran out of ideas and energy, with their dreams of replicating their 1976 triumph ending as Leicester’s bid to make history continues.

There were cheers and applause at the end of a match that doubled up as one of the government’s pilot events, with all those in attendance having to prove they had tested negative for coronavirus before the game.

‘Come on Leicester’ and ‘Oh, when the Saints’ echoed around Wembley in the opening minutes of a match that Ralph Hasenhuttl’s men started particularly nervily.

Ibrahima Diallo sloppily lost possession four minutes into proceedings and clumsily attempted to win the ball off Vardy, but the Foxes broke and Ayoze Perez – back in the side after his party antics – bent off target.

Referee Chris Kavanagh went back to book the midfielder and Vardy was able to continue after treatment as the teams played out a cagey, and largely lifeless, start.

Southampton failed to muster a single first-half shot despite periods in the ascendancy, while Leicester were failing to punish their opposition’s tendency to turn over possession.

Diallo was again guilty of losing the ball in the 33rd minute and was fortunate not to be punished as Youri Tielemans threaded a lovely ball through to Vardy, who sent an effort just wide of the near post. 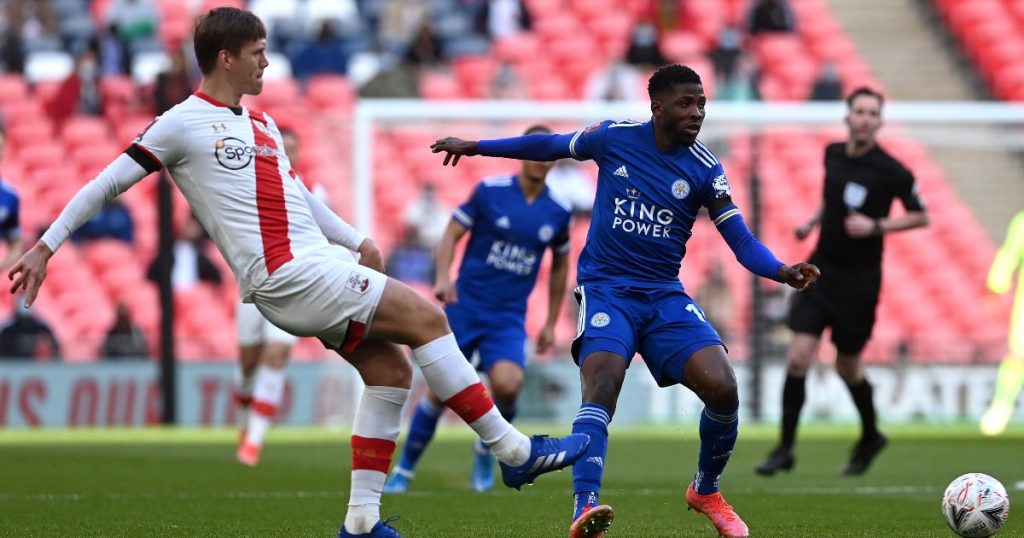 Wilfred Ndidi was all too easily allowed to meet a corner on the edge of the six-yard box and glance a header just over, before the Leicester midfielder flicked another corner to the far post.

This time Jonny Evans headed it back across goal and Vardy was just closed out by some desperate defending as the ball went over Fraser Forster’s goal.

Caglar Soyuncu – back in the Leicester defence after his positive Covid-19 test – was booked for clattering Kyle Walker-Peters just minutes into the second half, with Jannik Vestergaard heading over the resulting free-kick.

Saints were starting to look more positive, only to fall behind in the 55th minute.

Vardy’s movement on the flank left Jan Bednarek trailing in this wake and the veteran crossed for Iheanacho to get away a poor shot, only for it to luckily bounce back off Vestergaard as the striker fired home the loose ball.

Hasenhuttl brought Che Adams on in a bid to change the game, with the Leicester-born striker soon seeing a shot blocked before Diallo lifted over from distance.

Danny Ings was put through moments later but could not quite get a shot away, with Diallo flashing a side volley against the stanchion behind the goal.

Leicester settled after that spell and managed the game.

James Maddison flashed over when well-placed in the 77th minute, with the substitute – another to be dropped last week – trying another shot from range two minutes later.

Saints created precious little despite the chance of reaching a first FA Cup final since 1976 and it was Leicester celebrating at the final whistle.